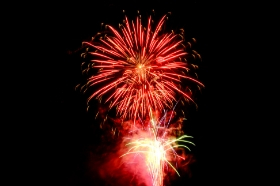 Firework displays have been taking part up and down the country in celebration of Bonfire Night.

In Manchester we saw fantastic displays taking place across the city from 30th October in Gorton, right through to Platt Fields Park, Fallowfield on the 5th of November. These displays saw thousands of attendees who were not only enjoying the fireworks displays, but also the funfairs and food stalls. If you were out enjoying the fireworks across the city we would love to see your images via our Twitter. Interestingly, Bonfire Night, previously known as ‘Bone Fire’ was illegal to celebrate in the UK before 1959, now it’s more popular than ever.

In last weeks blog we reported on autumn leaves, and the dangers around them at this time of year. Many people are unaware that in a public place it is down to your local authority to ensure that the fallen leaves do not cause a hazard to the general public. We also spoke about how in order to protect themselves local authorities have public liability insurance. If you suffer a non-fault injury due to the negligence of your local authority you are entitled to make a claim.The same applies for organised events like the ones being held across Manchester, they must be covered by public liability in order to take place to protect both themselves and the general public.

According to the British Red Cross, on average 1,000 people each year attend A&E for treatment of a firework related injury, over the four weeks around the event. The BBC has reported that the fire service in Manchester had to deal with more than 300 calls between 16:30 GMT and midnight despite heavy rain.

Last year you may remember the accident at Heaton Park that saw three injured due to fairground ride collapsing at the annual Bonfire Night event. Fortunately those involved were not seriously injured although questions were raised over the health and safety of the ride itself.

Sadly, accidents like this happen in the most unexpected of circumstances. What could begin as an exciting day out for you and your family can quickly turn into a nightmare if you suffer a non-fault personal injury.

At Sheldon Davidson Solicitors we believe that nobody should suffer due to the negligence of others, you should not have to suffer because of the negligence of others. We help individuals claim compensation for the injury, damages and inconvenience they suffer in an understanding and empathetic way. We understand the aftermath of a personal injury and do all that we can to aid you on your road to recovery. If you feel we could help, contact us on 0333 999 8800.